Four with nature from left to right: Widdop, Campbell, Komorowska and Kelly

Back to Derby for our next order of What Else Is Out There with an Americana act that is 3/4 British Midland and 1/4 Polish! Fractions are nothing here though as we’re going with our Fontana Instincts!

Tom Campbell (guitar, lead vocals), Jim Widdop (lead guitar, backing vocals), Magdalena Komorowska (bass) and Alex Kelly (drums) make up this Derby-based four piece that definitely don’t sound like a band that would come from this area of the country, or even this country in general!

From their start at the end of the noughties to their current incarnation that has been on a brief hiatus of late, The Fontana Instincts have been bringing their sound to the rest of the UK that brings you their sound which reflects the best in Americana.

Maybe not THAT ‘Murican, but something!

To start, Campbell was doing the whole singer-songwriter routine for a few years before meeting Widdop in 2008, each of them performing with different acts at the time. Widdop playing dobro and steel pedal in particular caught Campbell’s attention and both of them hit it off very well which resulted in them having a good ole’ jam!

After that jam and a subsequent six months of gigging starting from December 2008, they started working on an EP which would be known as The Chilka Sessions, but they weren’t satisfied with it so it never saw an official release.

The EP contained five tracks, some of which would end up on a certain future release such as Miss Muldoon, Night and Day and Millie Come and Get Me although later on it would be shortened down to just Millie.

Here’s Miss Muldoon as a primer.

The genesis of Fontana came about in 2009 with two more people added to the mix. The first was Tom Kitchen, a former bassist of heavy rock act LostAlone also knew how to play drums and was brought in after meeting Campbell at the Rockhouse in Derby and Luke Wynne, a good mate of Campbell’s who filled in the position of bassist for a few gigs.

After this new quartet met up with Birmingham musicians and producers Brian Nordhoff and Rob Cimarosti, they recorded four songs in one 16 hour session in a Moseley studio. The result was four good takes and Nordhoff encouraged Campbell to carry on writing and he would help them record an album in the future.

During the Summer of 2010, Campbell busked around Australia for inspiration and the wallabies no doubt, before being put in touch with a Polish girl who Kitchen knew (Komorowska) and wanted to join a band. A few drinks and a joyful jam later, the group was whole again.

Their first performance as a group was on the Main Stage at the 2010 Out the Box Festival in August but their first booked gig was in September at the Grapes bar in Sheffield. They would continue to perform for four months before going to back to Birmingham to start recording an album.

The recording process would start at the start of 2011 and would continue throughout the year. One of the gigs to stem the tides till then was a gig in April at the reliant Wetmore Whistle on the card with Tilted Smile and Lady and the Tramp.

Another big April gig came at the Bodega Social in Nottingham supporting Glasgow-based alternative rock act Kassidy who went on to tour with Lana del Rey in 2013!

In May, they were announced by BBC Introducing that they would be playing on the Allotment stage at YNot of that year! That particular stage would be headlined by beatboxing extraordinaire Beardyman and the festival as a whole would host big names like Maximo Park and local names like Max Raptor (cos we didn’t hear ENOUGH about them being at YNot!)

After a return to Out The Box Festival, the first Burtfest at Burton Rugby Club and their stint at YNot, they brought Benjamin Edmonds, formerly of Tilted Smile and Son of Eagle in to the studio to provide backing vocals as the finishing touch to their album.

Two big Midlands gigs came in October with a headliner at the Derby Assembly Rooms as part of the Evolution Derby College Talent Showcase and Burton promoter Loaded’s launch night at the Star and Garter.

Prizes for guessing what the hell the words are!

Two more great gigs for them that closed out the year were a support slot for Riding the Low at Sheffield’s Leadmill in October and being on the card with Son on Eagle and Boat to Row for a sold out show at the Derby Guildhall in December.

A rousing goodbye started off 2012 with the Fontana brigade supporting veteran power pop four piece The Souvenirs at the Victoria Inn to another sold out crowd.

Act who would support them in the coming months would be 5 Days of November and Lucida Scroll in Burton and at Derby’s Ryan’s Bar with London psych rock band West of the Sun and Exile84 big shot Andy Crowe. 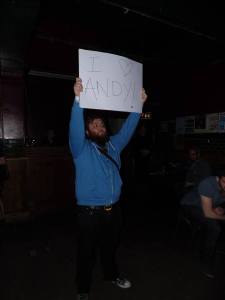 Well THIS guy thinks he is anyway!

Huge news came in April as they would be announced they would be supporting American alternative giants The Lemonheads (known for their hit cover of Mrs Robinson) on their ‘Shame about Ray’ tour at the Venue in Derby!

More big news to follow as they announced in May that they would release their long-awaited debut album Carousel which was set to be released on July 2nd and to hype up interest, they released a video for their song Our David on May 2nd.

In June, they rounded off the huge Burtfest weekend at the Arch Creations stage on Sunday 17th. Sure enough, this hyped up more interest, at least in Burton, for the album release, sure enough on July 2nd. 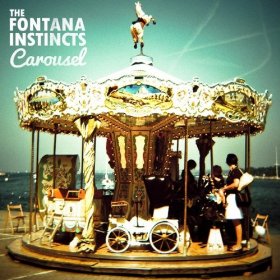 A member departure came in August when Kitchen left the group amicably for university which left the band without a drummer for Osfest in Longford. Campbell also did a solo outing at YNot to stem the tide before a new drummer could be brought in.

On summer transfer deadline day, or August 31st, the band did find their new drummer Alex Kelly formerly of Midlands Brit rockers The Iron Door Club who have supported the likes of Pete Doherty and Underground Heroes.

After a huge Liverpool O2 Academy performance, they returned to Burton twice at the end of the year with one even being Exile84‘s first hometown gig in November at the Whistle and also playing at the Tower Brewery for a Christmassy gig in December.

2013 was the last year we saw of the guys for a while but still, they made the most of it, with six of the year’s gigs being throughout February and March including a supporting slot for Turin Brakes at the Venue and a Jam Café performance in Nottingham.

Though not on the card for it, Campbell helped out with the sound and stage set-up for The Sunni Mae Festival in Willington, an event to raise money for cancer charity and in aid of Lily Mae Morrison, a young girl diagnosed with stage 4 Neuroblastoma.

A return to OsFest in July and their last gig (for now) at the Flowerpot in Derby supported by Tilted Smile and West of the Sun rounded off a brief summer for the guys and have since been on hiatus.

Still though, savour the last show…SAVOUR IT!!

Now though, let’s savour and look at the music. Like I said at the start, for a band that is made up of three lads from the British Midlands and a Polish woman, the Americana sound rings true in their music, sometimes doing it better than American bands!

The country-folk influences are strong in their tunes with songs ranging from calm country ballads (Room For Me), to rousing stompers (Forgotten Almost) that can transport you to the Snakeskin Inn in Georgia listening to them (I am SO sorry for that!)

Campbell’s smoky voice and Komorowska’s backing give each song a Brit rock spin on these Americana songs and Widdop’s ever-reliant guitar playing whether on a regular axe or a steel pedal gives these songs their uniquely sturdy American-British charm (would you expect anymore from a guy who had his head bloodied before a show but still carried on?)

Two songs I’ll give attention to are Carousel favourites Our David and Miss Muldoon. The first of which showing a good deal of their upbeat side to a story that doesn’t sound as upbeat, in fact it almost sounds quite distressing!

It tells the story of a man (called David I assume) who’s family members are worried about him being out for so long and just want him to get home safely. Aww!

The twang in the guitar and southern drawl vocals from Campbell are very much present in this song and while it won’t make you wanna go “Yee-haw!”, it will probably get you up dancing and singing along to the chorus.

If our David isn’t home

We will never be alone…

…We will stand to watch the phone until we

Secondly, Miss Muldoon provides that same up-tempo feel as Our David, but feels much raunchier with it’s subject matter of just wanting to impress that one woman that you’re eyeing up, but are just to intoxicated by pressure or drugs possibly to do so.

More specifically, the woman (who I assume is one Miss Millie Muldoon) is seen just browsing the merchandise at the record shop when the singer’s character is trying to go with the flow and ask her out, but is just not able to get the words out due to…whatever circumstances or certain substances!

Musically, it sounds like that dirty hard rock sound that you’d hear later on in the night at the Snakeskin when everyone’s had one too many whisky shots! Interested in dirty bar rock? Check this out!

In conclusion, The Fontana Instincts give a Western take on Brit rock that is very much welcomed. Derby have definitely struck gold with these guys so to speak and it would be nice to see some new material from them. Until we see that triumphant return, a rip-roaring serving of Brewtown tunes to you, from Burton and beyond!