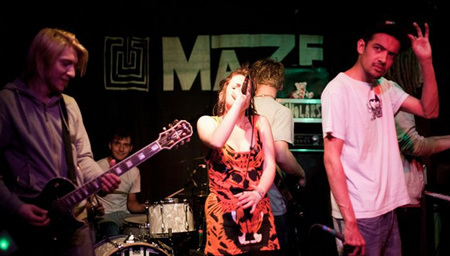 For the fifth edition of What Else Is Out There, we’re off to Nottingham to greet a dance act who aren’t entirely what you’d expect from the genre, especially when performing live! Though there’s six of them, it’s Just James.

Since their own formation in 2010, they have stopped by Burton a number of times to deliver their brand of electronic/dubstep/rock/hip-hop/soul/zydeco/leetcore/whatever the hell else music (they dubbed themselves ‘science fiction rock and roll’ if that’s easier) and that is why they are featured on Brewtown Music!

That and Motormouf’s pits here give Jack Poxon’s a run for their money!

But the tale here begins before all that though, we have to go back to 2008, where the public performing days of a young lad called Alex Young began and developed into being an instrumental (pardon the pun) part of the urban music scene of Nottingham with his style of human beatboxing that was looking to emulate the likes of Beardyman and Dub FX.

His main inspiration though was American beatboxer Rahzel, former member of The Roots and known for his vocal work on SSX and SSX Tricky. So much like a lot of musicians, Young’s beatboxing was self-taught…not that I know of many beatbox teachers anyway!

The big solo highlight came when Young entered into the Midlands heat of the Vauxhall UK Beatbox Championships in 2010 where, after some very impressive and funny beatboxing, got to the heat final but unfortunately lost to LucasTheBeatbox. I think my thoughts on his loss are summed up here.

Towards the end of that year, Young was invited to watch his college buddy’s (Child) band Just James play at a Christmas party in the Stealth club in Nottingham. He was very impressed with the band’s unique sound and after Anthony invited him for a jam to see what it would sound like to have a rapper in the group, he impressed so much that they decided to have him on as the sixth member of the band.

Just James themselves formed in October 2010 and Young had his first gig with them in April 2011 (the same month as a gig at the  after a shining first few months of performing that earned them a spot on the shortlist for the 2011 YNot Festival (Dammit how many more times do we have to hear about that one?!). Unfortunately though, they didn’t make the final cut.

After a good few months of recording, the band put out their first EP Keep Calm and Rave On Vol 1 on June 24th which they would promote at festivals they were performing at that Summer which were Ripley Music Festival in June and the Nottingham Waterfront in August.

In September, they would headline at The Maze music bar in Nottingham with Notts ska giants The Breadchasers and post punk indie band Tribal Suns. Being a Nottingham based act, they would be frequent performers at The Maze throughout their run as an act with their first gig there being in May.

In October, they had two very important gigs, in the context of this article of course, as they performed at battle of the bands competition in Derby for a chance at a record deal and their very first gig in Burton at the good ole Wetmore Whistle! Everyone goes there!

Just as a way to plug another Midlands music lover, Nottingham live music promoters Nusic had the band on their show also in October to promote them as well as perform an Invaders Must Die-like number called The Bassment.

We are the Just James!

The band began 2012 with some very good news. Through their shows in Derby and their battle of the bands competition, they were signed to Belper-based independent record label and music production team Sound Hub! Other bands signed to this label are Derby-based independent rock acts Whitemoor and James Warner Prophecies.

Two more notable gigs in Spring included a charity performance for Oxfam that also included Derby MC Eyez in April that raised £430 and a big performance at the Nottingham Royal Concert Hall on June 1st for the Queen’s Jubilee that was more of a play on the word queen for a Gay Pride concert!

But in a major highlight in June, they became a part of the 2012 Burtfest (redundancy is redundant I know!) performing on the Arch Stage on Saturday 16th June that also featured Great Scott, The Vibe and Riding the Low.

But we all know who the stars are…the band nobody there had heard of!

They would end up returning to Burton, to the Star and Garter specifically, later in the month to attempt to save the Wetmore Whistle after Burtfest left the former Whistle owner Ben Brettell in massive debt with a fundraising gig along with The Vibe, Get Cubs and Kitten Pyramid.

To build towards an album release, they released a single on July 16th called Red Light Means Go which is notable for climbing all the way to #11 on the iTunes Electronic charts! That’s not like Reverbnation’s country/county divisions either, that’s official!

Arguably, one of the biggest crowds they have ever played to came towards the end of July with their performance at the Nottingham Pride Festival where they played on the main stage in front of 20,000 people and supported Basshunter of all people!

Two more big gigs in November closed out 2012 for them with the first on Nov 2nd at Nottingham Rock City supporting Follow You Home and Sonic Boom Six and on Nov 22nd headlining at the Nottingham Bodega along with support from Great Scott and The Afterdark Movement. These also promoted a new free downloadable song See It Through released on the 27th.

2013 gave them a mini-festival at the Derby Assembly Rooms in January that had House of Thieves and Kitten Pyramid on the card…but due to heavy snow, it was re-scheduled for March 23rd where Jamie Joseph and Get Cubs were added to the mix! It even snowed THAT day too but it didn’t deter the willing!

On April 14th, they released their new single Limitless which when released also made a pretty good push up the iTunes Electronic Chart making it #29 this time and had it’s own music video released on the 21st.

Wherever they are, The Prodigy are not far behind, or in front…eh!

After performing again at the Whistle with The Sixth Letter at the start of June, they ended the month being a part of XStatic Festival in Swadlincote which also featured Get Cubs, Raptorial and We Were Ghosts.

But that was not the biggest festival announcement they had, as their already exciting announcement of them performing at Strawberry Fields Festival wasn’t big enough, they were told they would be opening the Festival on Friday on the Main Stage! Get Cubs were at this festival too as well as more mainstream acts The View and The Enemy.

After a big summer of festivals, they were set to perform what they said was their ‘biggest gig of the year’ at the OxJam Soiree set for 29th October which was promoted with a humorous little Youtube ad.

Though I don’t know what gave me more whiplash, the camera pans or Young’s line delivery!

With new songs in the pipeline, a gig supporting the legendary Dub Mafia at the Maze and a summer festival season announcement of Bearded Theory to come, who knows what else is set for Just James in 2014?

Buggered if I know, so let’s just look at the music itself now! Midlands Music Maniacs described them as the ‘Who needs class A’s when you’ve got these lot’ lot! Yep, I’d say that sounds about right!

Just James‘s sound has a massive presence whether being performed on stage or simply being blasted through your headphones. With influences from The Prodigy (of course!) and Pendulum spurring their sound on, their music commands your attention whether it be the rock base sound, the electronica buzzings, Young’s lyrical drops or Reeves’ soulful singing.

One song to listen to is their first single Red Light Means Go which already seems like something the high guy meme would say and that contradiction forms a good basis for song and immediately hits you full-on with the bass blares at Young’s furious rhymes!

Young’s lyrics, which I’m not even going to list they’re going by so fast, are delivered in a way that makes you think that this guy is not going to let anyone tell him to stop what he’s doing since he’s going by at such a pace, it’d be like an OAP kindly asking a truck from Maximum Overdrive to slow down!

The instrumentation is just as hard as the vocal performance from Young, but Reeves’ singing give it an almost calming quality despite the fury still remaining!

I can lose half my beard to this!

Another track to look at is Limitless which judging by that title is already going to be as ‘full-on’ as the previous track and the JJ lot don’t disappoint! Drum and bass are officially approved on Brewtown Music!

The keys riff at the start provides a steady flow to the energy to follow which the band provides in spades and can be seen done in the music video. Dan Lowe, the producer and mixer at SoundHub also needs recognition for providing their music as well as this one with great care and consideration to make the most hard-hitting track possible!

With Young’s flawless flow providing the verses and Reeves’ chorus line of “To know no bounds, is a merry-go-round”, the vocal work does give the band’s rock/dance sound it’s own unique identity and prove that EDM is not the only option for those who want to mosh to dance music! Still though, check them out and judge for yourself!

In closing, Just James give rock and dance another great union and have graced Burton with their presence a good number of times along the way! With more tracks and big festivals on the way, they’ll be sure to get everyone moving and opportunities could be limitless! A hardcore serving of Brewtown tunes to you, from Burton and beyond! 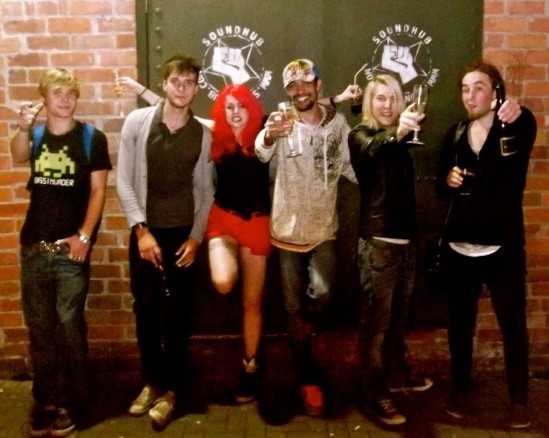 One response to “What Else Is Out There #5: Just James”