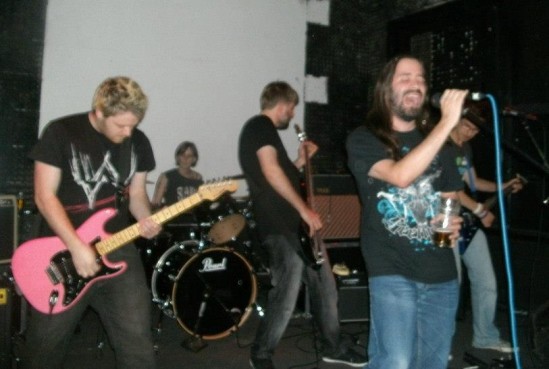 On the 19th Brewtown post and 2nd edition of Throwback Thursday, we’ll look at a band who broke up early last year, but whose four years together as a band showcased an array of talent, including the ‘Voice of Burton’! Be prepared to go The Distancing.

Jonathon Brindley (vocals), Tom Kendrick (lead guitar), Keri Lawrence (bass), Sarah Lawrence (drums), Jay Jones (guitar) and Tim Kenyon (former guitar until 2012) made up this alt rock group who gained the love and respect of many in Burton on Trent and around with their hard-sounding, but enjoyable tunes backed up by a big lead vocal.

Describing their music as (pardonnez mois francais) “huge shit-hot alternative rock tunes”, The Distancing became a go-to band for any venue in Burton that needed a loud, high-energy show. 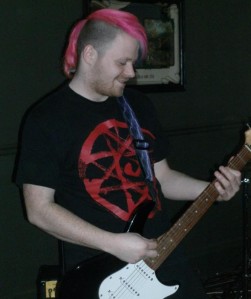 And that’s just from Kendrick’s mohawk!

Keri and Sarah, being brother and sister, has obviously met long before the band began! Their first musical project Garter, named after the Star and Garter pub which has hosted many gigs in Burton for years, only fuelled their own love of the local music scene and being a part of it so the time had come to expand bringing in a few more members.

Enter Jonny Brindley, the ‘Voice of Burton’ and frontman of other Brewtown bands such as Six Weeks Falling and These Things Exist which also featured Kitten Pyramid‘s Mark Hamon on bass. Having known Brindley for years and with SWF being a long-term break at this point, Keri brought him in to see how it would all work out.

To complete the band (at least for then), Keri looked to travelling guitarist/drummer Tim Kenyon who has been part of many orchestras through drumming and a few bands through drumming and guitar work. For this occasion, Kenyon became the main guitar player in the band and thus, The Distancing had come into being. 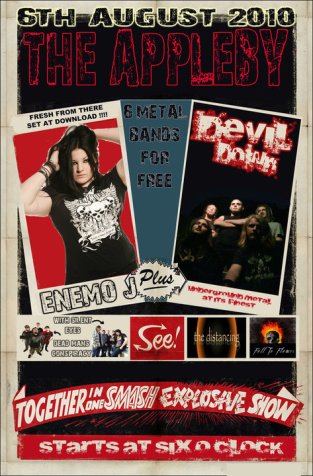 And THIS happens right away for them! Lucky shmucks!

Summer of 2010 was a good starting point for them as they had their first ever gig at The Appleby as part of Geekfest in July. The poster above shows they were received so well that they were put on the card to support Midlands metal veterans Enemo J in August! They would also support EJ’s album launch at The Old Bell in Derby come December.

In between all these first few months of gigs, they would be recording for their first album at Arch Recordings Studios having written and worked on their material since 2009. Although some of the material was based on songs that wouldn’t gel with SWF’s style like Sorry and Love Song.

They did gel very well with the style of The Distancing though and eventually made into onto the self-titled album. The album they set out to do was to make sure that their songs were all diverse rock songs that didn’t have two songs that sounded the same, displaying this through their gigs which mainly took place in Burton and Derby at pubs like the The Royal Oak and The Wetmore Whistle.

To demonstrate, here’s them performing a cover! Still though, it’s an interesting take, particularly in the vocals.

To start 2011, the band set their sights high by auditioning for that year’s Glastonbudget festival at the Wetmore Whistle set up by local music initiative WIRED. Despite a well-received set, they didn’t make the cut, but Roz Bruce did so at least some local talent got through!

Regardless of not getting into Glastonbudget, they soldiered on and kept gigging and recording for their album with gigs including their first headliner at the Whistle hosted by Arch Presents, another support slot for Enemo J at the Old Bell in June and a Battle of the Bands competition hosted by The Star Foundation in July which also featured Great Scott, Lucida Scroll and the eventual winners Buried From Below.

Arch Creations would be good to The Distancing as it would with most of the local talent as they would feature at many other Arch gigs including the Royal Oak launch night that took place in November which also featured Great Scott and Star From Ivy. 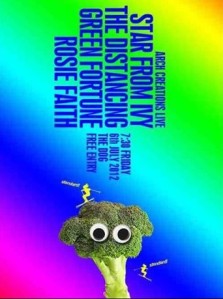 But not our broccoli overlord! From this picture’s date, he comes later!

And by later, I mean 2012! In Feburary, The Distancing amongst many other local artists and bands were given the opportunity for their music to be choices for the public to create their own ‘Arch Presents mix tape’ which would allow them to pick four songs from a list that featured The Distancing‘s songs The World Turns and Revenge.

A line-up change came in March though, with Kendrick deputising on guitar with Kenyon before eventually replacing him full-time as Kenyon pursued other musical interests in a more classical persuasion again.

In June, the band were featured on the 100+ band card of Burtfest 2012 (yes THAT festival again!) performing a set on the Arch Creations stage on the same day that Riding The Low would headline that stage that night!

Maybe Paddy could have used his Hollywood status to bring Lonely Island in to cameo on this! How could they not? (Damn Youtube blocking the title to kill that joke!)

Another line-up addition came in August with Jones (formerly of Lady and the Tramp and Fantastik 4) deputising on guitar with Kendrick this time. Hold on, didn’t the band have an album in the works for about two years?

Well I’m glad you asked that question me, because after nearly three years of writing songs and recording, they finally released their eleven track self-titled album in October.

Sadly though, due to work and other musical commitments, the band decided to call it a day on February 2013 playing their final headlining gig at the Star and Garter with Lucida Scroll, Frank Hunter and Quinn Lam supporting. Only time will tell if their post-album material will be released one day on an EP as originally intended… 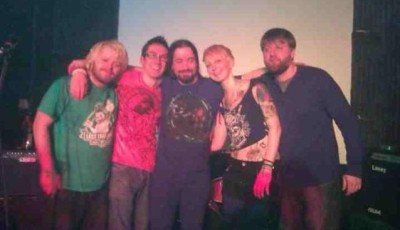 But for now, savour the memories.

Regardless, how does the material fare? Their first album definitely shows off their capacity to rock and makes for a diverse listen and their latest material makes for an interesting ‘what could be’ situation as well.

While there are many voices in the Brewtown scene, ‘The Voice of Burton’ is a title that Brindley has earned with his vocals ranging from smooth balladeer to wailing rocker, all done effortlessly with impressive projection and charisma. The rest of the band of course provide a great backdrop for Brindley to sing to with each of them showing influence from many different styles including Manic Street Preachers to Pearl Jam particularly with the often Eddie Vedder approach of their frontman.

Two songs I will give a quick look at as a recommendation for you will be Leaving Singapore and The World Turns, both of which are the sixth and eleventh (also final) track of their self-titled album.

Right off the bat, Leaving Singapore has a great four chord opener leading into a rousing and passionate sing-along track that each of the band members brings their gusto to in droves. I personally have a soft spot for sing-along, raise your beer glasses belters being into singing myself so the way this song is put together is right up my alley!

The song was originally intended for Brindley’s old group Brackenwood who formed way back in 2004 and with that band being described as ‘energetic’, in transitioned very well into The Distancing‘s style with the brisk drums and roaring guitars.

The point of view of the song seems to be told from a man who goes from buzzing from a night of intoxicated frivolity in another country with a beautiful woman to feeling sad that he has left and wishes to be with her again. Typical heartbreak holidays eh?

In Singapore, I was higher than I’ve been before

And the scene was so right, city shining lights and

The most beautiful thing I’d ever seen

And I confessed to you, nothing compares to you

How can you sleep when I’m not there?

If that’s a bit too depressing to be your sing-along, then The World Turns will be a bit more of a joyous, if destructive option for you! By destructive I don’t mean that it’ll make you want to break things, it’s just the type of world-beating vibe it gives off!

While this song does start off a bit down in the dumps, with the person in the song feeling lonely and broken on a weekend just trying to find something to do or cling to, but as the verse swells into the chorus, the guy takes a slightly more triumphant approach and says “What the hell, I’ll try to enjoy myself!” as everything else feels like it’s crashing down on him.

We’re singing love songs while the world blows to bits

We’re taking nothing and I can’t get over it…

Lights come down as the world turns round, I’m unbelievable.

This is a song that really calls for the Voice of Brewtown which he really does sounding as world-beating as the lyrics show him to be feeling. Give it a listen and see what you personally make of it.

In closing, The Distancing were a great act to have around in the Midlands music scene, mixing many styles of rock to create a powerhouse performance for every gig and a good body of work to show for it. Here’s to a possible return, or at least a reminder of the joy they brought to those who heard them. This has been Brewtown Music serving you a fine vintage Midland tune brew. 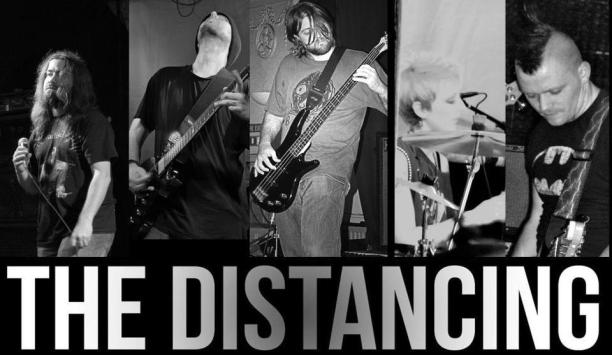