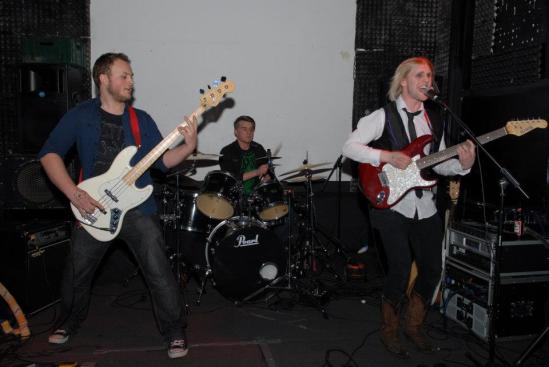 To begin this new part of the Brewtown posts called Throwback Thursday (bandwagon I know, sue me!) which I will be using to put forth acts who are either on an indeterminable hiatus time or entirely defunct but still great to listen to, I will look at a folk punk trio that always gave a rowdy, yet traditional performance whenever they were on stage. Have a read of the Lucida Scroll. 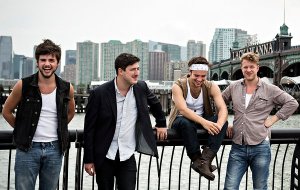 Probably as punk as they’ll ever get!

The band itself was formed in November 2010 after Jordan and a few mates had a jam after an afternoon of playing football and thought that this could potentially lead to something great. Ah, the beautiful game will do that to ya!

At this point leading into 2011, Lucida was made up of Jordan, Evans, Danny Scott, the second guitarist for the band and occasional third guitarist Kevin Bayliss. All they needed was a drummer for people who only needed a beat for their acoustic punk-folk collective. After booking studio time for a demo in January at Arch Studios, they found their drummer in long-time friend Hughes the next month, giving the band even more energy.

After a positive response to their gigs and releases on Myspace, they were able to go on tour less than half a year into their inception! Well it was a tour of Edinburgh, but still, international tour! Technically. 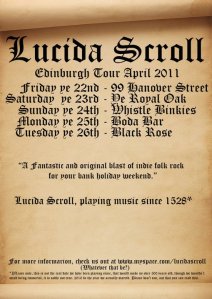 Shouldn’t that be “thy bank holiday weekend?” Be consistent lads!

Two more dates were added in May to perform in Pomona, Sheffield. One for just another gig and two for a Battle of the Bands which they didn’t win but were received well either way. In July, they participated in another Battle of the Bands competition, this time in Burton at the Wetmore Whistle where acts like Great Scott, The Myways and The Distancing were taking part in. Why battle? Can’t they all just get along?

By August/September, they had built up such a live/online profile that not only were their T shirts that they released the first month being sold as far as Budapest, but also for the release of their debut E.P. Monologues, they had two launch nights. One, naturally, in Burton and the other in Rotherham, near Sheffield where they had performed previously, obviously leaving a ripple effect oop north!

Both nights had great support from Alex Canner of The Dark Horses and comedy musician Bill Cort for the Burton night and Jim Marston and Manchester-based Indie rockers The Loaded Dice but of course the highlight was the Lucida boys, giving each crowd member a reason why they needed a copy of their new EP.

And because I need a relevant segue, here’s Marston and Jordan singing Fairytale of New York at the Whistle! Works like a charm!

With a new year brought a new line-up with Evans, Scott and Bayliss having other band commitments such as with Phoenix Salvation for Evans, a position for bassist was taken up by Jackson who would stay on as bassist for the rest of LS’s run. Jordan had his own music commitments with himself, meaning his solo act Son of Roger with a setup consisting of a guitar/banjo and a tambourine/bass drum/foot pedal combo! Typical folk soloist showing off!

One of the first major gigs of the year for them was supporting another band’s EP launch, Black Wolf Catch’s new EP Crackpot Summer Lounge (Don’t ask!) filmed and organised by Arch Creations. It all comes back to Arch!

CCTV the gig! I don’t trust an EP title like Crackpot Summer Lounge do you?

After winning a cash prize from a music competition and performing on a lorry container in the High Street as part of the Queen’s Diamond Jubilee, both in the Spring and in Tutbury, LS prepared themselves for an event I have mentioned before and will mention again because of how big and unfortunately money-consuming it was, Burtfest. Competing with bands like Max Raptor and Follow You Home, they were able to pull off a great set at the Arch Creations stage. Once again, back to Arch!

Along with their gig input, they also had a lot of recording output, recording, mixing and mastering whenever they were able to with the new material that they had in mind and always experimenting with them for certain gigs. This led to talks of a possible full studio album at the end of the year.

LS in 2013 supported The Distancing for their final headlining gig at the Star and Garter, were supported by politically driven rock group The Downpage Liberation, covers/originals band Fantastik 4 and Midlands folk collective Green Fortune. But in May of this year was the last of their online updates before Jordan left Burton to study at the Academy of Contemporary Music in Guildford to bring the band into hiatus. When will they return? Who knows! Still, it’s good to speculate isn’t it? 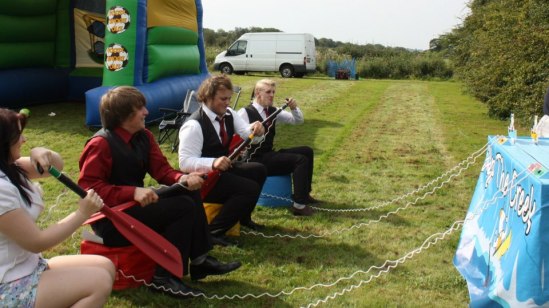 They’re just preparing themselves for battle…of the bands mind!

But of course we look at the music at this point. I did mention at the start that they were a folk-punk collective, but honestly, their music has the tendency to cross over into even more genres!

Indie, Spanish music and straight up rock n roll are touched upon with LS’s music being led by the powerful strums and passionate vocals of Jordan who in a way, sounds like if Jamie T started covering The Pogues. I do mean that in the best possible way! The chemistry between instruments and enthusiasm from the other band members cannot be ignored either, with Hughes and Jackson being a great drum and bass backing and Evans and Scott providing an even bigger dynamic to the proceedings earlier on in their run.

One song of theirs in particular I will be looking at is one of their most popular tunes Perfection. Now some of you who regularly come here think “Wait a damn minute! I’ve been here before haven’t I? Didn’t you already look at a song called Perfection from Star From Ivy?” Calm yourselves Brewtown lovers, tis just a coincidence!

Yes it’s got the same name, is in the key of D minor and has a flamenco influence. Tis just a coincidence I say!

Of course, the same themes are touched on as the SFI song of the same name, but LS’s idea of Perfection sounds and is performed much differently than SFI. The song starts off with a calm bass drum leading into an Evans electric riff and a Jordan acoustic riff that steadily builds over the first minute until it is kicked into high gear with a “Hey!” from Jordan.

The song has a great Latin-folk energy that rarely lets up and the lyrics from Jordan are just as thought-provoking as Baldwin’s SFI:

Count your stars, see how many you own

I assure you it’s not much, but it’s less than I know…

One of the lyrics later on in the song name drops the title, but in such a good way:

Perfection is just an illusion of the mind

This phrase is so good at summarising the whole idea of what it is to be perfect and think is perfect that it’s on the band’s T-shirt for God’s sake! I own that T-shirt so I know! Even if Jordan’s vocals crack at times and aren’t perfect, of course, it could just be an illusion in my mind, so what the hell do I know? Check the song out and links to their music below.

Even if they’re not currently about as a live band, I still suggest you check Lucida Scroll out some time. Their brash, powerful folk tunes have helped them stand out in a big way in Burton and beyond and the complexities that lie in their recordings when they get the chance to experiment is something to behold. Here’s hoping they return soon! I hope you’ve enjoyed the first Throwback Thursday. May it bring you another vintage Brewtown Tune soon. 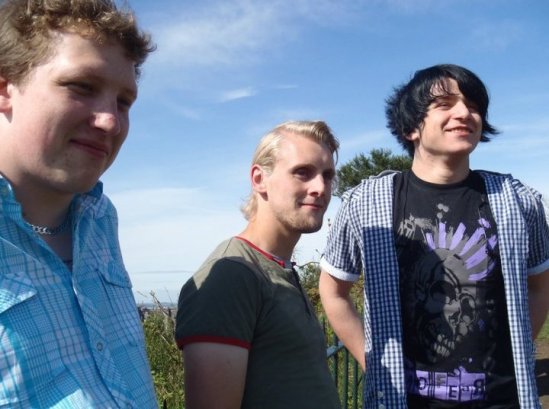 One response to “Brewtown #14: Lucida Scroll”