The Young Folks from top to bottom: Boyd, Tunley, Rose and Clark

When you think of folk music, you don’t normally think of four fresh-faced teens from Lichfield with beat pedals do you? But here they are, to show you what else is out there, they are The Offbeat.

Bryony Rose/Simcox (Violin, Vocals), Daniel Clark  (Guitar, Ukulele, Banjo, Vocals), Hannah Boyd (Violin, Viola, Vocals) and Rosie Tunley (Cajon, Percussion, Synth, Vocals) make up this multi-talented group of Midlands youngsters who like many indie roots acts set out to put a contemporary spin on folk music, a genre that this writer has a soft spot for.

But I couldn’t commit to growing a beard like this!

With so many instruments being played between them and such a professional attitude towards their performance, it’s no wonder that The Offbeat have become a highly sought after group all over the Midlands whilst keeping a happy disposition and cranking out catchy and energetic tunes.

The story of The Offbeat officially began in 2010, but two years before when a young folk collective amounting to 20 members (Looks like Kitten Pyramid have rivals then!) formed known as Wildfire Folk. This ensemble came about as part of the Lichfield Arts organisation and wanted to play folk “as it should be played – with enthusiasm, energy and style.” But more on them another time.

It was and has always been in this ensemble that two long-time friends (Tunley and Rose) would team up with fellow musician Boyd and Rose’s boyfriend Clark to form their own band that would look to combine roots, indie, folk and pop music to create enjoyable music that would be as fun for them to play as it would be for the audience to listen.

Well it get’s more fun after this, trust me!

In 2011, they would be performing in any building that can put on music from the offie down the road to the local church hall. It would also be the year of two big festival performances that really got people’s attention. One was in July at the annual free festival, Lichfield Fuse, where they played in the acoustic tent where they got such a good response they ended up returning there in 2013 with a lot more material. Once again though, more on that later.

Another of these performances occurred at Shrewsbury Folk Festival in August where they ended up receiving a very positive review of “Simply breath-taking – absolutely gorgeous vocals.” 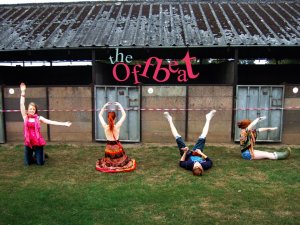 Why didn’t their interpretive dance, clearly from Clark’s stance, about pregnancy get rave reviews too?

It was during this time that they were in the process of recording their first, self-titled EP which was released in November 2011. Also during November, they would start a tradition of performing at the all-day weekly festival The Free Love Club in Birmingham which they continue to do on and off to this day. The Free Love Club has also had on the likes of Roz Bruce, Sam Garrett, Kitten Pyramid and Call-Me-Unique.

2012 was twice as eventful for The Offbeat starting off with the announcement that due to the high amount of votes they received after entering a competition called The Next Brit Thing the year prior, they were placed on the shortlist of the Midlands Final hosted by PRS for Music (Performing Rights Society) with the prize being a chance to record at Abbey Road! Although they didn’t win the whole Brit Thing, their song Don’t Make the Call was placed in the top 7 of the PRS Songwriters Competition!

Their profile was boosted even more when they supported The Musgraves, an already famous roots pop band who received radio play from Tom Robinson on BBC Radio 6 and their song Last of Me was played on Graham Norton’s Radio 2 show and they did end up playing on Norton’s national talk show in February of 2012.

Miranda July knitting a heart-shaped doily couldn’t be as twee as that!

They would then go on to support another indie folk act in May in the award-winning and BBC folk award nominated Gilmore and Roberts in Birmingham. G & R themselves described The Offbeat as “sounding great and very inventive.” Later that month, they would get their own slice of radio play having their free single (If It’s No) Then Just Say No played on Harrow Community Radio.

The same single would then end up being reviewed by Lucy Onions of Born Music Online which pointed out the similarities to Charlie Simpson that the band had described themselves as.

Here’s a screen-cap, cos the link to the review itself is broken. Ah Internet!

Highlights from the Summer of 2012 included The Big Lunch in Lichfield Cathedral which had BBC coverage, a radio interview at Scratch FM (Birmingham Student Union Radio), a set performed around Burton at the Rosliston Forestry Centre as part of GladeFest and the announcement of their belated album launch for September 5th.

This debut album titled We Are The Offbeat was recorded and produced at both Mighty Atom Smashers in Kidderminster (co-founded by Robert Plant) and Monochrome Studios in Warwickshire. The launch took place at the Lichfield Guildhall which brought in a sell-out crowd for the eleven track LP. This album’s fourth track Running Backwards was played on BBC Radio Introducing in the West Midlands round this time too.

After a brief three-month hiatus due to Uni for both Clark and Rose, they set out to further promote their new album and new set material which brings them into 2013. With a new year came a new release in the form for a music video for Running Backwards in April.

Take the spotlights and glitter! TAKE THEM!

Along with another piece of radio play that month on Radio Warwickshire and various York and Newcastle radio stations, a chance to support Top 10 busting folk artist Gabrielle Aplin in Newcastle-under-Lyme came their way which they took full advantage of urging fans to give them enough votes to gain the opportunity. Unfortunately, this goal wasn’t achieved but the support they gained from the competition was encouragement enough.

During the Summer 2013, they performed at the Leamington Peace Festival, one of the UK’s longest running free festivals (since 1978) and in July, they went on a summer holiday (Play Cliff Richard and I’ll kill you!) travelling to a nice little cottage in Nefyn to take in the scenery, write some new songs, play some old ones and busk where and when they had the chance.

And perform a tight set (badum tch!) in the cottage kitchen. Relaxing!

Following their holiday, their new song Turn received some radio play on both Stafford Radio and BBC West Midlands Introducing (just GO AWAY already!) and the song itself was released as a free download by then band in light of their Facebook page reaching 1000 likes! Hint hint Brewtown fans!

Along with a brief stop off at the Rosliston Glade again with Wildfire Folk, the band announced they would be performing in London in November as part of the ‘A Few Friends’ exhibition in Battersea where they will perform throughout an evening of art, design and architecture in a one-night show curated by architect Will Alsop.

But here we go, that time again, how does the music itself hold up? As I said at the beginning of this article, I love folk music and am always into energetic, vibrant sounds so their music sounded right up my alley!

That and…can you blame me looking at this cover?!

Some people might think that roots music is a bit too sweet and saccharine to get behind, but this band hits my sweet spot in just the right way. With a consummate attitude to their performances and recording, they show experience that might be seen from artists double their age, while they play some intensely catchy and happy tunes.

They remind me of the Corrs in this regard and not just because they are three women with folk instruments and one guy with a guitar! Influences from Noah and the Whale are pretty apparent too, especially with this cover of their hit song 5 Years Time.

The two songs of theirs I will pick out as favourites of mine are Running Backwards and Turn. The first of which (video posted earlier) is an upbeat number that gives you the perfect introduction to their repertoire. A jangly acoustic guitar opening, stompbox beat and catchy as hell violin riff are what gives this song its identity but the lyrics, sung by Tunley, show a more steady and reflective tone showing how samey a relationship can end up being and the only solution is just to move on from it:

“The sun sets In the east today,

I know I’m wrong, you know another way

But it’s so far, running backwards

in the shoes you gave to me…and so we go on.”

The second song Turn is more down tempo than the first song mentioned with a softly strummed guitar, tightly tapped drum beat (which almost sounds like the beginning to a Tilly and the Wall song) and beautiful violin work guiding the track along. Clark this time on lead vocal gives a very concerned yet frustrated voice to this song being worried for himself and his partner about her persistently odd behaviour:

“Whatever you say, I’ll just agree

It’s been a long time since you’ve made sense to me.

My dear, have you lost your mind?

You spend your dark days in the brightest light.”

It sounds like it has an undertone of not understanding someone with a mental illness but then again, it’s just my speculation. It’s all subjective with my stupid arse so you can check it out on your own time!

If you are a fan of Indie Folk artists, these guys are an essential listen. If you aren’t or the genre kind of grates on you, I still recommend them to show a side to the genre that although young, doesn’t mean inexperienced, unprofessional or overly sweet. For those of you who are indifferent, thanks for stopping by to see the history of a great band and hope you come by next time for the next serving of Brewtown tunes, in Burton and beyond!