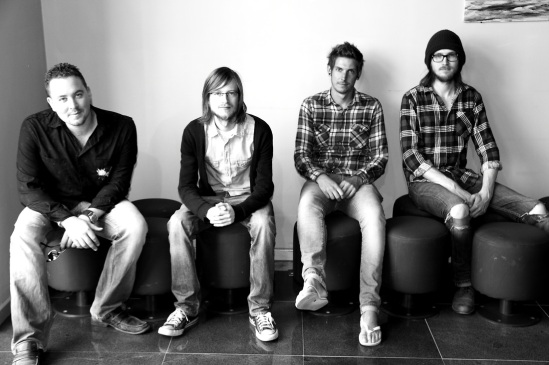 Working those stools from left to right – Baldwin, Gibbs, Maczkowski and Baker

A talented band is not hard to come by if you look in the right places. But not only is this band talented, it’s also incredibly busy, with two members who will get further mentions here later down the line. For now though, here’s Star From Ivy.

Chris Baldwin (lead vocals/guitar), Daniel Baker (lead guitar), Steve Gibbs (bass) and Mark Maczkowski (drums) form the rock outfit that have been around since 2001 but needed to take a while to mature into the well-respected band of musical teachers they are today. Well, one of them is a teacher but their live performances and musicianship is well worth learning from.

Of course from their initial run as teenagers (with Luke Edgington on bass instead of Gibbs), they what any other band would do by doing the pubs, the clubs, Battle of the Band competitions and any festivals that would have them on their bill.

A big opportunity was in reach though in 2004, when they along with a Church Gresley based band called Slave were accepted into the annual music business showcase for the Emergenza festival following talks with Sony/Columbia Records. The fact that they didn’t win was unfortunate since the round of the competition took place in Manchester whilst up against beloved Manchester bands was a factor in their defeat. Still, if Sony were involved, I’d hate to think what Simon Cowell would have done if he somehow got a hold of them!

They WERE described as an emo band back then!

The group decided to go on a hiatus in 2006 during which time Baldwin was in his second year at Derby University later graduating in 2007 with a BSc in Multimedia Technology & Music Production.

This hiatus lasted until 2010 when the old crew (with Gibbs now joining the fray) steadily redeveloped their sound from an emo band to a more gritty but still heartfelt rock band. Gibbs came into SFI having been a member of the hip hop/alternative group The Sixth Letter (mentioned in my Great Scott article) Learning Support Assistant in Music Technology at Burton College which helped him fit right in with the musical education leanings of Baldwin.

Throughout 2011, SFI were either recording new material or doing gigs left and right as Arch Creations mainstays performing said new material. That new material would combine with their previous work to create their first LP Prologue (A sign of things to come, ironic that it took so long to get to the beginning!) which was released in January 2012 that had been ten years in the making, with Edgington on the LP as the bass player.

The LP was mixed and mastered at 2fly Studios in Sheffield under the watchful eyes and ears of Alan Smyth who has produced albums for bands such as Pulp, Arctic Monkeys and Reverend and The Makers.

The only piece of radio exposure they got in that time was on Ashby and Coalville’s station, 99.2 Hermitage FM, but was enough to spur more people into buying Prologue and allowed a few of the members more time to focus on each of their respective side projects.

Baldwin and Baker spent time out of SFI with Paddy Considine’s band Riding The Low and scoring the soundtrack to Considine’s BAFTA winning film Tyrannosaur. No sweeping orchestral movements, mostly ambient guitar sounds that helped add to the movie’s cold and rough atmosphere (The film’s the best cure for happiness I’ve ever known!)

Gibbs on the other hand has been working on and has recently released a classical EP In Passing which he worked on with American composer Cyrus Reynolds. The compositional opposite of Tyrannosaur’s score, this lush, beautiful orchestral journey which features electronic elements was well received by music reviewers across the Internet, has been the soundtrack to a short film Where Am I? and being praised and promoted by the well-renowned Icelandic multi-instrumentalist and metal drummer Ólafur Arnalds.

Those feels are coming on again!

OK, now that my emotions are back in check, let’s take a look at the band’s work. I can certainly say that they’ve shaken away the ’emo’ stigma they once had to become the professional and mature rock band they are today.

The musicianship has always been tight in SFI with either Edgington or Gibbs on bass and their work on Prologue is a prime example. The songs can be gentle and heartfelt or angry and loud.

Baldwin’s vocal range is particularly impressive going from soft baritone (Kizuna), to soaring tenor (Everest) and even getting into falsetto territory with notes even women can’t reach! (As I Wait) Baker’s guitar work is fantastic and his keen eye for riffs and progressions is reflective of how he (plus Baldwin) are in multiple bands. Maczkowski’s drum work is also of note, particularly on As I Wait where he has to drum through at least four time signatures in that song alone!

Two songs that strike me the most from this lot couldn’t be any more different from each other, these being Kizuna and Perfection.

The first song being a song that the band does not perform anymore due to it being a more timely song released on the eve of 2011 to mark Japan naming Kizuna as it’s ‘kanji’ (special word) of that year. The meaning of the word is ‘bond’ and Baldwin calls for this bond to be made:

“Take this fear of education

Take this fear of everything.

Make it bloom by finding solace

In the knowledge of this dream.”

This kind of message could very well have come across as cheesy or insincere if delivered in a half-assed way, but it is delivered with sincerity and hope in the voice of Baldwin and leaves you with a very happy and accomplished feeling.

The second song though is a much more fiery song, dealing with a common theme which is the concept of ‘What truly is perfection?’ But just because it’s a common topic doesn’t mean it can’t be made fresh and interesting, especially with these lyrics being belted out:

“We, as a race, cannot deal with perfect.

We’d much rather wade in shit!

Whereas I’d rather be somewhere close to the skin.

Where I feel my lungs ‘cos I can hardly breath!”

The frustration that the world cannot deal with certain ideas of how perfection is perceived to be and to instead dwell in conflict and negativity is felt here as Baldwin sees perfection as more of an inner idea but is smothered by those telling him otherwise. The instrumentation is incredible here with a flamenco-like rhythm to start that develops into a haunting bolero after the second chorus and ending on a ear-rupturing cacophony that is bound to leave an impression, especially when performed live!

However, I could be talking a pretentious load of old bollocks at this point so I urge you to check them out or yourself. Feel free to let me know what you think in the comments.

With the release of their upcoming second album Circularity, it seems that SFI could very well go for a few more decades, give or take another hiatus along the way. If I am proven wrong, their mark on the Burton music scene is potent and their place as teachers of both their class students and their rock band peers is unmistakable. But for now, class dismissed. This has been Brew Town Music serving you another fine brew of Midlands tunes.

Star From Ivy’s stuff and other tidbits